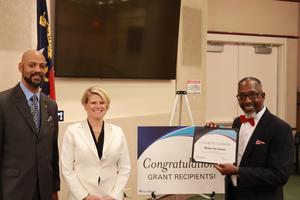 North Carolina State Superintendent Catherine Truitt welcomed the nine school districts that will share in the more than $300 million in new state lottery-funded grant awards for school construction, renovation projects and other capital improvements to Raleigh to commemorate this special occasion.

“This is a once-in-a lifetime gamechanger for Weldon City Schools,” offered Dr. Dannie Williams, Superintendent of Weldon City Schools. “We are pleased to have been awarded these funds, and we plan to create a school that our community will be proud of and that we all cherish,” he added.